Your failures make you interesting 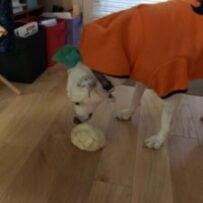 Before you launch into any big goals or new year’s resolutions, I hope you’ll do something a bit smaller and possibly more fun: fail.

Think about something you always wanted to try, and go do that. Do it imperfectly. Make an enormous mess. Fail really big. Take pictures of that dumpster fire. And then tell your friends, because now you have a great story. Funny how that works; it’s our failures that make us interesting.

Last fall I was meeting with my client Lara, and we were discussing her career goals. She mentioned some ideas that she felt were out of her reach like opening a stand at the farmers market. During our conversation she said wistfully, “I’ve always wanted to make bread.” As if bread was some sort of impossible dream! I challenged her to bake bread over the weekend and bring it to our next career coaching group meeting.

Pictured here is Lara’s dog who wouldn’t even give her first attempt at bread a little lick. Ok, so it failed to rise, and she basically made play-doh. 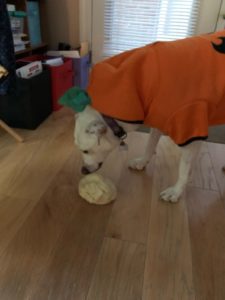 But the second batch was bread! She brought it to our  group meeting, and we all tried it. And it was good! Some folks even had seconds.

The best part is that it wasn’t the success that made for a great story. It was the failure, the perseverance, the trying again, and then the success.

Nobody (except maybe you) thinks you should be a huge success at something new the first time you try it. So if you want to have any hope of hitting those resolutions or big, important goals in the future, you may want to go out and get used to failing and trying again.

What’s your, “I’ve always wanted to make bread?” That thing that sounds like a lot of fun to you and is entirely do-able, if you’d just give yourself some space to make a mess? Do that! And then show pictures of your initial fail to your friends.

p.s. Your comments are most welcome on this post at https://www.facebook.com/jenfrankcoaching